A Theorem about Circles and a Volumizing Algorithm

Note that this much more widely generalizes the well-known geometric mean theorem. This can be seen as a consequence of the power of a point theorem.

A pleasant interpretation of this is that if we take a diametric cross-section of a sphere and choose a point on that disk, the height of the sphere above that point is the geometric mean of the legs of any \(2N>1\) equiangular, planar, stellar net connecting that point to the boundary of the disk.


This theorem suggests an algorithm for producing a 3D volume given a closed 2D boundary shape. If we assume the 2D shape is of a diametric cross-section, we simply apply the method detailed above to produce the height above that point. That is, for a given point inside the shape, we take an N-leg equiangular stellar net emanating from that point to the boundary of the shape. The height of the surface at that point is then the geometric mean of the N legs of that net.

This method ensures that circular shapes produce spherical surfaces. However, if N is low, for less regular boundary shapes, the resulting surface may be quite lumpy or sensitive to how the angles of each net are chosen. One solution, then, is simply to make N large enough. However, this may end up being computationally expensive.

In theory, it may be possible to find the asymptotic value: find all parts of the boundary shape visible from the given point, and find the integral of the log of the distance, sweeping over the angle. If the boundary is a polygon, this involves evaluating (or approximating) integrals of the form \[ \int\ln\left ( \sin(x) \right)dx \] Which have no general closed form in terms of elementary functions. However, we can evaluate certain cases. One easy example is that of an infinite corridor formed from two parallel lines. We find that the height profile is double that of a circular cylinder. It may be desirable, then, to determine another function to multiply by which will halve the heights of corridors but leave hemispheres undisturbed.

Below we give some visual examples of the results of the algorithm. The original 2D shapes are shown in red.

In order, an equilateral triangle, an icosagon, a five-pointed star, an almost-donut, an Escherian tesselating lizard, and a tesselating spider.
at 9:08 AM No comments:

Email ThisBlogThis!Share to TwitterShare to FacebookShare to Pinterest
Labels: Math


Suppose we have an infinitely tall cylinder of radius R, filled to a height H with an incompressible fluid. We then set the fluid rotating about the cylindrical axis at angular speed \(\omega\). Suppose we take a differential chunk of fluid on the surface, a radius r from the axis. 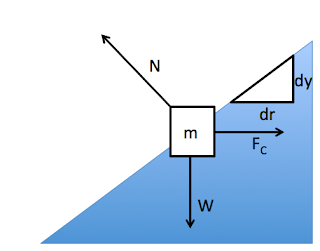 
Suppose you are an employer. You are looking to fill a position and you want the best person for the job. To do this, you take a pool of applicants, and for each one, you test them N times on some metric X. From these N tests, you will develop some idea of what each applicant's performance will look like, and based on that, you will hire the applicant or applicants with the best probable performance. However, you know that each applicant comes from one of two populations which you believe to have different statistical characteristics, and you know immediately which population each applicant comes from.

Suppose we assume sub-populations A and B have the same variance \(\sigma_{AB}^2\), but \(\mu_A>\mu_B\). then we can note the following few implications:

Though the above effects may, in theory, be small, their effects in practice may not be. Humans are not perfectly rational and are not perfect statistical computers. The above is meant to give motivation for taking seriously effects that are often much more pronounced. If there is a perceived difference in means, there is likely a tendency to exaggerate it, to think that the difference in means should be visible, and hence that the two distributions should be statistically separable. Likewise, population variances are often perceived as narrower than they really are, leading to further amplification of the biasing effect. Moreover, the parameter estimations are not based simply on objective observation of the sub-populations, but also if not mainly on subjective, sociological, psychological, and cultural factors. As high confidence in one's initial estimates makes one less likely to take more samples, the employer's judgment may rest heavily on subjective biases. Given this, if the employer's objective is simply to hire the best candidates, she should simply use the meritocratic predictor (or perhaps at least invest some time into getting accurate sub-population parameters).

However, it is worth noting some effects on the candidates themselves. As a rule, the candidates are not subjected to this bias just in this bid for employment alone, but rather serially and repeatedly, in bid after bid. This may have any of the following effects: driving applicants toward jobs where they will be more favored (or less dis-favored) by the bias; affecting the applicant's self-evaluations, making them think their personal mean is closer to the broadly perceived sub-population mean; normalizing the broadly perceived sub-population mean, with an implicit devaluation of deviation from it. Also, we can note the following well-known problem: personal means tend to increase in challenging jobs, meaning that the unfavorable bias will perpetually stand in the way of the development of the negatively biased candidate, which then only serves to further feed into the bias. Both advantages and disadvantages tend to widen, making this a subtle case of "the rich get richer and the poor get poorer".

The moral of all this can be summarized as: the semi-meritocratic predictor should be avoided if possible as it is very difficult to implement effectively and has a tendency to introduce a host of detrimental effects. Fortunately, the meritocratic predictor loses only a small amount by way of informative-ness, and avoids the drawbacks mentioned above. Care should then be taken to ensure that the meritocratic selection system is implemented as carefully as can be managed to preclude the introduction of biasing effects. one way of washing out the effects of biasing in general is simply to give the applicants many opportunities to demonstrate their abilities.